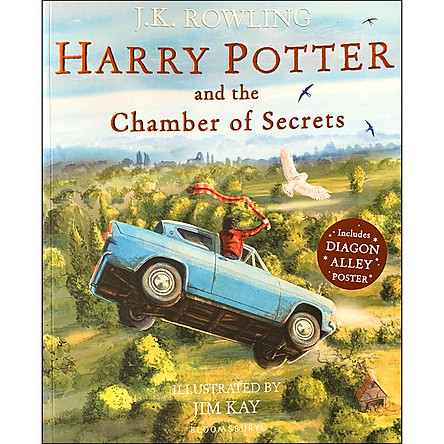 Jim Kay's dazzling depiction of J.K. Rowling's wizarding world has won legions of fans since the first Illustrated Edition of the Harry Potter novels was published in hardback in 2015, becoming a bestseller around the world. This irresistible smaller-format paperback edition of Harry Potter and the Chamber of Secrets perfectly pairs J.K. Rowling's storytelling genius with the enchantment of Jim Kay's illustrations, bringing the magic of Harry Potter to new readers with full-colour pictures and a handsome poster pull-out at the back of the book. This edition has been beautifully redesigned with selected illustration highlights – the fully illustrated edition is still available in hardback.

Fizzing with magic and brimming with humour, this inspired reimagining will captivate wizards and Muggles alike, as Harry and his friends, now in their second year at Hogwarts School of Witchcraft and Wizardry, seek out a legendary chamber and the deadly secret that lies at its heart …

“Seeing Jim Kay's illustrations moved me profoundly. I love his interpretation of Harry Potter's world, and I feel honoured and grateful that he has lent his talent to it” – J.K. Rowling

“One of the greatest literary adventures of modern times” – Sunday Telegraph