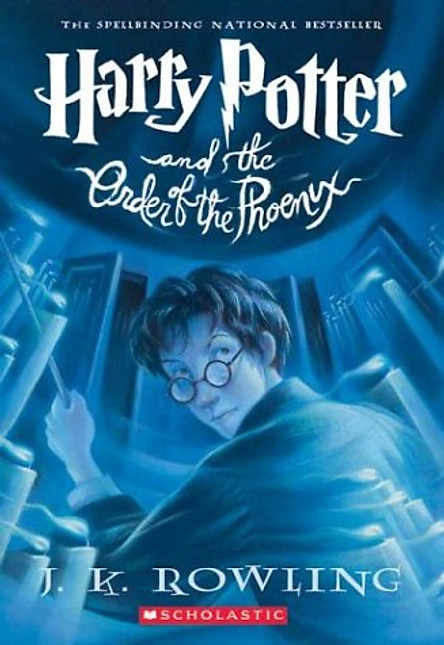 I say to you all, once again--in the light of
Lord Voldemort’s return, we are only as strong
as we are united, as weak as we are divided.
Lord Voldemort’s gift for spreading discord and
enmity is very great. We can fight it only by showing
an equally strong bond of friendship and trust.

So spoke Albus Dumbledore at the end of Harry Potter’s fourth year at Hogwarts. But as Harry enters his fifth year at wizard school, it seems those bonds have never been more sorely tested. Lord Voldemort’s rise has opened a rift in the wizarding world between those who believe the truth about his return, and those who prefer to believe it’s all madness and lies--just more trouble from Harry Potter.

Add to this a host of other worries for Harry…
• A Defense Against the Dark Arts teacher with a personality like poisoned honey
• A venomous, disgruntled house-elf
• Ron as keeper of the Gryffindor Quidditch team
• And of course, what every student dreads: end-of-term Ordinary Wizarding Level exams

…and you’d know what Harry faces during the day. But at night it’s even worse, because then he dreams of a single door in a silent corridor. And this door is somehow more terrifying than every other nightmare combined.

In the richest installment yet of J. K. Rowling’s seven-part story, Harry Potter confronts the unreliability of the very government of the magical world, and the impotence of the authorities at Hogwarts.

Despite this (or perhaps because of it) Harry finds depth and strength in his friends, beyond what even he knew; boundless loyalty and unbearable sacrifice.

Though thick runs the plot (as well as the spine), readers will race through these pages, and leave Hogwarts, like Harry, wishing only for the next train back.