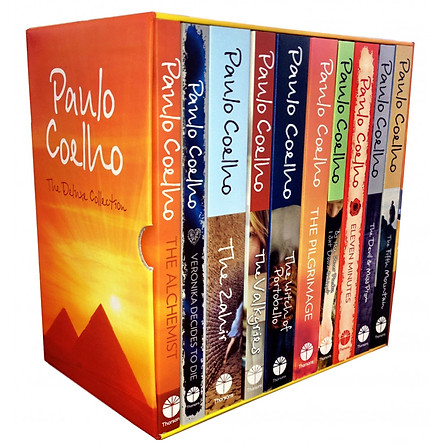 Combining magic, mysticism, wisdom and wonder into an inspiring tale of self-discovery, The Alchemist has become a modern classic, selling millions of copies around the world and transforming the lives of countless readers across generations.

Paulo Coelho's masterpiece tells the mystical story of Santiago, an Andalusian shepherd boy who yearns to travel in search of a worldly treasure. His quest will lead him to riches far different—and far more satisfying—than he ever imagined. Santiago's journey teaches us about the essential wisdom of listening to our hearts, of recognizing opportunity and learning to read the omens strewn along life's path, and, most importantly, to follow our dreams.

A novel from internationally acclaimed author Paulo Coelho – a dramatic story of love, life and death that shows us all why every second of our existence is a choice we all make between living and dying.

Veronika has everything she could wish for. She is young and pretty, has plenty of boyfriends, a steady job, a loving family. Yet she is not happy; something is lacking in her life, and one morning she decides to die. She takes an overdose of sleeping pills, only to wake up some time later in the local hospital. There she is told that her heart is damaged and she has only a few days to live.

The story follows Veronika through these intense days as to her surprise she finds herself experiencing feelings she has never really felt before. Against all odds she finds herself falling in love and even wanting to live again…

It begins with a glimpse or a passing thought. It ends in obsession.

One day a renowned author discovers that his wife, a war correspondent, has disappeared leaving no trace. Though time brings more success and new love, he remains mystified – and increasingly fascinated – by her absence. Was she kidnapped, blackmailed, or simply bored with their marriage? The unrest she causes is as strong as the attraction she exerts.

His search for her – and for the truth of his own life – takes him from France to Spain, Croatia and, eventually, the bleakly beautiful landscape of Central Asia. More than that, it takes him from the safety of his world to a totally unknown path, searching for a new understanding of the nature of love and the power of destiny.

With ‘The Zahir’, Paulo Coelho demonstrates his powerful and captivating storytelling.

This is a modern-day adventure story featuring Paulo’s supernatural encounter with angels – who appear as warrior women and travel through the Mojave desert on their motorbikes.

Haunted by a devastating curse, Paulo is instructed by his mysterious spiritual master to embark upon a journey – to find and speak to his guardian angel in an attempt to confront and overcome his dark past. The Valkyries is a compelling account of this forty day quest into the searing heat of the Mojave Desert, where Paulo and his wife, Chris, encounter the Valkyries – warrior women who travel the desert on motorcycles, spreading the word of angels.

This exotic spiritual odyssey is a rare combination of truth, myth, imagination and inspiration. Ultimately it is a story about being able to forgive our past and believe in our future.

This is the story of Athena, or Sherine, to give her the name she was baptised with. Her life is pieced together through a series of recorded interviews with those people who knew her well or hardly at all – parents, colleagues, teachers, friends, acquaintances, her ex-husband.

The novel unravels Athena's mysterious beginnings, via an orphanage in Romania, to a childhood in Beirut. When war breaks out, her adoptive family move with her to London, where a dramatic turn of events occurs…

Athena, who has been dubbed 'the Witch of Portobello' for her seeming powers of prophecy, disappears dramatically, leaving those who knew her to solve the mystery of her life and abrupt departure.

Like The Alchemist, The Witch of Portobello is the kind of story that will transform the way readers think about love, passion, joy and sacrifice.

Here Paulo Coelho details his journey across Spain along the legendaryroad of San Tiago, which pilgrims have travelled since Middle Ages. On this contemporary quest, he encounters a Chaucerian variety of mysterious guides and devilish opponents and learns to understand the nature of truth through the simplicity of life. The Pilgrimage holds an important place in Paulo Coelho's literary canon. His first book, it not only paved the way for his phenomenal novel The Alchemist , but it also fully expresses his humanist philosophy and the depth of his unique search for meaning.

Rarely does adolescent love reach its full potential, but what happens when two young lovers reunite after eleven years? Time has transformed Pilar into a strong and independent woman, while her devoted childhood friend has grown into a handsome and charismatic spiritual leader. She has learned well how to bury her feelings . . . and he has turned to religion as a refuge from his raging inner conflicts.

Now they are together once again, embarking on a journey fraught with difficulties, as long-buried demons of blame and resentment resurface after more than a decade. But in a small village in the French Pyrenees, by the waters of the River Piedra, a most special relationship will be reexamined in the dazzling light of some of life's biggest questions.

A chance meeting in Rio takes Maria to Geneva, where she dreams of finding fame and fortune, yet ends up working the streets as a prostitute. In Geneva, Maria drifts further and further away from love while at the same time developing a fascination with sex.

Eventually, Maria's despairing view of love is put to the test when she meets a handsome young painter. In this odyssey of self-discovery, Maria has to choose between pursuing a path of darkness, ‘sexual pleasure for its own sake’, or risking everything to find her own 'inner light' and the possibility of sacred sex, sex in the context of love.

A daring modern fable about the nature of love and sex.

A stranger arrives in the small mountain village. He carries with him a backpack containing a notebook and eleven gold bars.

Burying these in the vicinity, the stranger strikes up a curious friendship with a young woman from the village – Miss Prym. His mission is to discover whether human beings are essentially good or evil.

In this stunning novel, Paulo Coelho’s unusual protagonist sets the town a moral challenge from which they may never recover. A fascinating meditation on the human soul, The Devil and Miss Prym illuminates the reality of good and evil within us all, and our uniquely human capacity to choose between them.

Having been published in over 100 countries, translated into 42 different languages, with over 21 million copies of his books sold internationally, Paulo Coelho can truly claim to be one of the most popular writers in the world.

The Independent on Sunday has called him a ‘publishing phenomenon’.

Paulo’s writing is a visionary blend of spirituality, magical realism and folklore. His stories are simple and direct, yet they have the power to change lives and inspire you with the courage to follow your dreams……His fifth novel, The Fifth Mountain, is set in the 9th century BC. Elijah is a young man struggling to maintain his sanity amidst a chaotic world of tyranny and war. Forced to flee his home, then choose between his newfound love and security and his overwhelming sense of duty, this is a moving and inspiring story about how we can transcend even the most terrible ordeals by keeping faith and love alive.