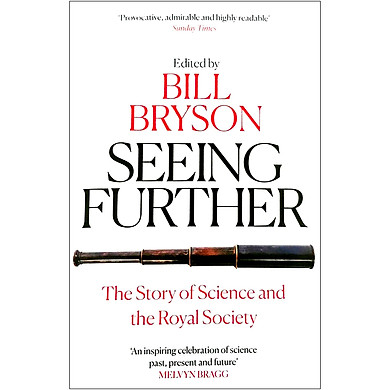 Seeing Further: The Story of Science and the Royal Society (Edited by Bill Bryson)

Edited and introduced by Bill Bryson, with contributions from Richard Dawkins, Margaret Atwood, Richard Holmes, Martin Rees, Richard Fortey, Steve Jones, James Gleick and Neal Stephenson amongst others, this beautiful, lavishly illustrated book tells the story of science and the Royal Society, from 1660 to the present.

Since its inception in 1660, the Royal Society has pioneered scientific discovery and exploration. The oldest scientific academy in existence, its backbone is its Fellowship of the most eminent scientists in history including Charles Darwin, Isaac Newton and Albert Einstein. Today, its Fellows are the most influential men and women in science, many of whom have contributed to this ground-breaking volume alongside some of the world’s most celebrated novelists, essayists and historians.

This book celebrates the Royal Society's vast achievements in its illustrious past as well as its huge contribution to the development of modern science. With unrestricted access to the Society's archives and photographs, Seeing Further shows that the history of scientific endeavour and discovery is a continuous thread running through the history of the world and of society – and is one that continues to shape the world we live in today.

‘This is a book with cerebral riches, heavy with history, to be consumed at leisure…it is also beautifully illustrated’ - Guardian

‘This book makes abundantly clear what was best about the society 350 years ago, and remains so today, is an unshakeable commitment to the value of rational inquiry and evidence as the basis for good decision making…lavishly illustrated, it manages to strike just the right note between celebration and provocation’ - Financial Times

‘Beautifully produced and sumptuously illustrated book…gem-like contributions, from a heady mix of FRS (Fellow of the Royal Society)…a fitting memorial to the Royal Society and all it stands for…this beautiful book showcases distinguished scientists making difficult concepts exciting and accessible, and eloquent narrators diverting us with page-turning tales, all in their own distinct ways’ - Independent on Sunday

‘This weighty tome, celebrating 350 years of the Royal Society, is a must read for any lay scientist, but it is also accessible for curious non scientists… in a vivid introduction, Bill Bryson highlights some of the many interdisciplinary discoveries made by notables such as Isacc Newton, Benjamin Franklin, Joseph Lister and Isambard Kingdom Brunel… a pleasingly thematic appraisal of this centuries-old institution brought to you by 20 esteemed writers… lets look forward to another 350 years of groundbreaking discovery’ - Time Out

‘’Seeing Further’ is a handsome book – it is beautifully illustrated – containing thoughtful insights, eloquently expressed…as a celebration of 350 years of modern science, it is a worthy tribute’ - Economist