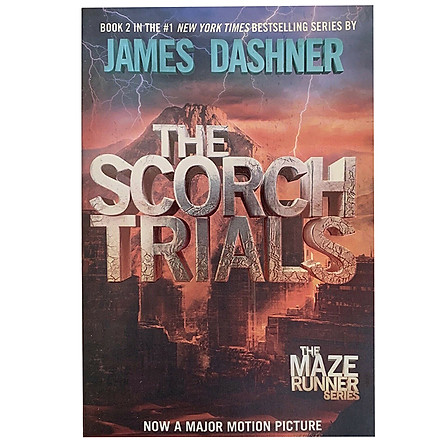 The Scorch Trials picks up where The Maze Runner left off. The Gladers have escaped the Maze, but now they face an even more treacherous challenge on the open roads of a devastated planet.

And WICKED has made sure to adjust the variables and stack the odds against them. Can Thomas survive in such a violent world?

Q: Where was the worst place you’ve ever been lost or trapped? Did you use Thomas-like ingenuity to figure out the problem?
A: Interesting you should ask that, because The Maze Runner saved my life last Halloween! Ok, not really, but close. My son and I went to a corn maze, and we got lost and stuck. It made me realize how mean I am to my characters! I hadn’t been thinking when we entered and I have to be honest, I wasn’t paying attention. I didn’t think I’d get lost in a Halloween corn maze! But as soon as we realized that we had no idea how to get out I used the trick Thomas learned in the first book--turning right no matter what--and sure enough, we got out. I have a lot more respect for corn mazes now!

Q: The Maze Runner has been compared to other popular YA series like  and . What do you think of those series? (And what do you think the draw is to post-apocalyptic societies for YA readers?)
A: First, let me start by saying that I love both of those series a lot! I think everyone is attracted to the idea of a post-apocalyptic society because it’s fascinating to imagine what the future could hold, and scary to know that maybe, just maybe, it could really happen. Although we hope not. Or do we?

Seriously, though, there’s so much that teens today have to deal with. Life isn’t as simple as it used to be with media everywhere at all times. And our country has been at war for a huge part of most teenagers’ lives. It’s a reality that kids face these days, and to see that life could go on could be almost reassuring.

Q: How did you come up with the shuckin’ Gladers’ slang? And have you ever accidentally used it in real life?
A: The slang had several purposes, but mainly it was to give the Gladers' language a different flavor. To show how a community can evolve. Not only is it in the future, but they've been isolated as well.

And on a more realistic note, an unsupervised group of boys would definitely be using language that could begin to take over the story itself. I wanted it to be realistic, but not a glossary of bad language. It would have become limiting for the book in terms of readership and, well, I’m a parent!

Q: What made you decide on a solar flare as a catastrophe (vs. all the other apocalyptic scenarios)?
A: I have to admit, I’m somewhat of an apocalypse buff. When I first started working on The Maze Runner I read an article somewhere about solar flares and I was fascinated. Not only were they a unique idea back then, but it seems completely plausible. Solar flares are natural occurrences, and the cycle for larger flares is again approaching. We’ll be seeing larger flares that really do affect things like communication and space travel. I just took things a little farther.

I also didn't want it to be a nuclear holocaust because I think that's overdone. And it doesn’t seem like we’ll need something that violent anymore to cause our own end. We’ve done a great job of making Mother Nature pretty angry!

Q: One thing that always bugged me: Why couldn’t the Gladers climb up and run around on top of the walls? (At least during the day.)
A: There's a part where Thomas asks Minho about that actually. Minho answers that they've tried it and can't get up that far. The maze has a lot of illusion and technology to make it seem bigger than it is. And I wanted the reader to imagine a maze with walls so high that you could never get to the top.

Q: I’ve heard that The Maze Runner might be made into a movie. If it is, what would you like fans of the book to see up there on the screen? Sometimes literary elements can be lost in translation to film--what’s important for you to remain unchanged?
A: I would love to see a movie made! My biggest hope would be that they cast it well, write it well, and really transfer the mystery of it to the big screen, not just the action. Not much to ask, right?

Q: There are a lot of scenes in the first two books with very graphic violence and death both against and initiated by teenagers--why did you choose to make the brutality so prevalent in a YA series?
A: There is a lot of violence, yes. Next question?

Really, though--I wanted to show what a brutal world it has become, and what a desperate situation the Gladers’ are in, so the reader can understand the stakes. If everything is safe, why would the boys want to leave? I also wanted to blur the lines of what is acceptable to survive in such an environment. We’ve been interested in the idea of survival for as long as we’ve been telling stories. And in modern culture, we’ve gone from , to , to ...if there’s no law anymore, who’s to say what’s right and wrong?

Q: You ended The Scorch Trials with a cliffhanger to rival the ending of . What sorts of things can your readers look forward to in The Death Cure?
A: I just turned in the third book, and I'm very proud of it and excited about it. Every last question is resolved, you see much more of the real world, and the ending is not what people may expect but I'm confident they'll be satisfied with the resolution. And lots of twists and action of course!

Gr 7 Up–This dystopian novel begins where The Maze Runner (Delacorte, 2009) ends. Thomas and the rest of the group's escape from the Maze and the horrifying creatures called Grievers has proven to be short-lived because WICKED, the group behind it all, has another trial in store for them. Sun flares have destroyed most of the Earth, and a virus called the Flare has ravaged its population. Infected people turn into zombies called Cranks that attack and eat one other. The kids are told that they have the Flare but if they succeed in surviving the second trial, they will be cured. With few supplies, they must travel across 100 miles of hot and scorched land within two weeks to reach a safe house to receive the cure. When Teresa, Thomas's best friend and the only girl in the group, disappears, and he loses the ability to communicate telepathically with her, he and the other guys determine to find her. As they trek across the barren desert encountering crazed Cranks, the teens' loyalty to one another and the group is tested. The fast-paced narrative and survival-of-the-fittest scenario is reminiscent of Suzanne Collins's The Hunger Games (Scholastic, 2008). Although these characters aren't quite as compelling and their made-up slang takes a little getting used to, each character's personality is distinct. The unresolved ending will leave readers impatiently waiting for the conclusion to the trilogy.–Sharon Rawlins, New Jersey State Library, Trenton. (c) Copyright 2010. Library Journals LLC, a wholly owned subsidiary of Media Source, Inc. No redistribution permitted.