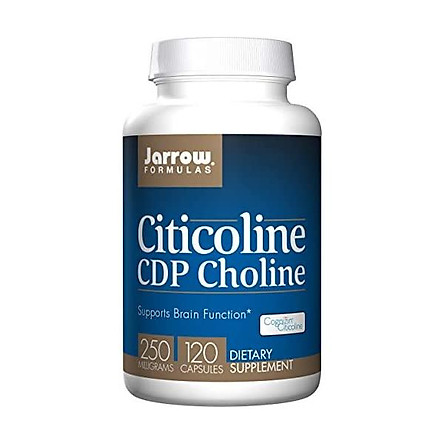 Citicoline [stabilized CDP Choline (cytidine 5'diphosphocholine)] is a naturally occurring intermediate involved in the synthesis of phosphatidylcholine, a major constituent of the grey matter of brain tissue (30%)

The basic neural building blocks become less readily available and are less efficiently utilized as the brain ages. One reason this occurs is because the same age-related changes to the vascular system that diminish heart function can also negatively affect the blood supply to the brain. In fact, many other factors involved in mental decline reflect undesirable changes in the body at large. It would seem that a healthy body really does help lead to a healthy mind. Although the causes of mental decline are diverse, a few basic changes are common to most forms of deterioration that specifically affect the brain. Reduced synthesis of necessary neurotransmitters, decreased circulation, and diminished cellular efficiency are all the enemies of sound memory and mental clarity. Perhaps surprisingly, phospholipids influence all of these areas critical to brain health.*

Citicoline (cytidine 5’-diphosphocholine) is a molecule that consists of cytidine and choline joined together by a diphosphate bridge. Once citicoline is ingested, it is broken down into its component parts, and these readily cross into the brain and central nervous system. Both components are incorporated into the phospholipid fraction of the cell membrane and organelles, such as mitochondria. Once there, the components of citicoline act as precursors for the biosynthesis of structural phospholipids (e. g. phosphatidylcholine, phosphatidylethanolamine and phosphatidylserine) in neuronal membranes, support cerebral metabolism, and stimulate the production of neurotransmitters.* Indeed, increased levels of phosphatidylcholine, noradrenaline, acetylcholine, and dopamine have been observed in animal administered citicoline.*

Clinical research has demonstrated a reactivation of brain mitochondrial ATPases and the Na+/K+ ATPases (involved in producing energy) when citicoline is consumed by humans.* Cholinergic compounds, such as acetylcholine, also play significant roles in learning and memory. As such, citicoline has been evaluated in the areas of verbal memory, object recognition, recall, and overall cognitive performance.*

Researchers have theorized that citicoline may also be effective in helping brain cells prevent the buildup of different toxins.* Such effects reflect not just the impact of citicoline upon the synthesis of acetylcholine, dopamine, and noradrenaline, but also its indirect impact upon membrane health and transport regulation.*

Citicoline [stabilized CDP Choline (cytidine 5’diphosphocholine)] is a naturally occurring intermediate involved in the synthesis of phosphatidylcholine, a major constituent of the grey matter of brain tissue.* Citicoline consumption promotes brain metabolism by enhancing the synthesis of acetyl-choline, restoring phospholipid content in the brain, which positively affects memory and other brain activity.*

*These statements have not been evaluated by the Food and Drug Administration. This product is not intended to diagnose, treat, cure, or prevent any disease.