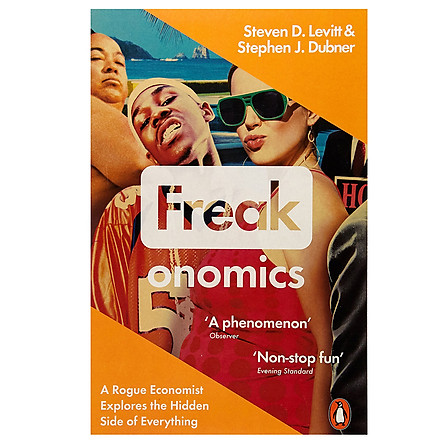 Economics is not widely considered to be one of the sexier sciences. The annual Nobel Prize winner in that field never receives as much publicity as his or her compatriots in peace, literature, or physics. But if such slights are based on the notion that economics is dull, or that economists are concerned only with finance itself, Steven D. Levitt will change some minds. In Freakonomics (written with Stephen J. Dubner), Levitt argues that many apparent mysteries of everyday life don't need to be so mysterious: they could be illuminated and made even more fascinating by asking the right questions and drawing connections. For example, Levitt traces the drop in violent crime rates to a drop in violent criminals and, digging further, to the Roe v. Wade decision that preempted the existence of some people who would be born to poverty and hardship. Elsewhere, by analyzing data gathered from inner-city Chicago drug-dealing gangs, Levitt outlines a corporate structure much like McDonald's, where the top bosses make great money while scores of underlings make something below minimum wage. And in a section that may alarm or relieve worried parents, Levitt argues that parenting methods don't really matter much and that a backyard swimming pool is much more dangerous than a gun. These enlightening chapters are separated by effusive passages from Dubner's 2003 profile of Levitt in The New York Times Magazine, which led to the book being written. In a book filled with bold logic, such back-patting veers Freakonomics, however briefly, away from what Levitt actually has to say. Although maybe there's a good economic reason for that too, and we're just not getting it yet. --John Moe --This text refers to an out of print or unavailable edition of this title.

Starred Review. Forget your image of an economist as a crusty professor worried about fluctuating interest rates: Levitt focuses his attention on more intimate real-world issues, like whether reading to your baby will make her a better student. Recognition by fellow economists as one of the best young minds in his field led to a profile in the New York Times, written by Dubner, and that original article serves as a broad outline for an expanded look at Levitt's search for the hidden incentives behind all sorts of behavior. There isn't really a grand theory of everything here, except perhaps the suggestion that self-styled experts have a vested interest in promoting conventional wisdom even when it's wrong. Instead, Dubner and Levitt deconstruct everything from the organizational structure of drug-dealing gangs to baby-naming patterns. While some chapters might seem frivolous, others touch on more serious issues, including a detailed look at Levitt's controversial linkage between the legalization of abortion and a reduced crime rate two decades later. Underlying all these research subjects is a belief that complex phenomena can be understood if we find the right perspective. Levitt has a knack for making that principle relevant to our daily lives, which could make this book a hit. Malcolm Gladwell blurbs that Levitt "has the most interesting mind in America," an invitation Gladwell's own substantial fan base will find hard to resist. 50-city radio campaign. (May 1)
Copyright Reed Business Information, a division of Reed Elsevier Inc. All rights reserved. --This text refers to an out of print or unavailable edition of this title.